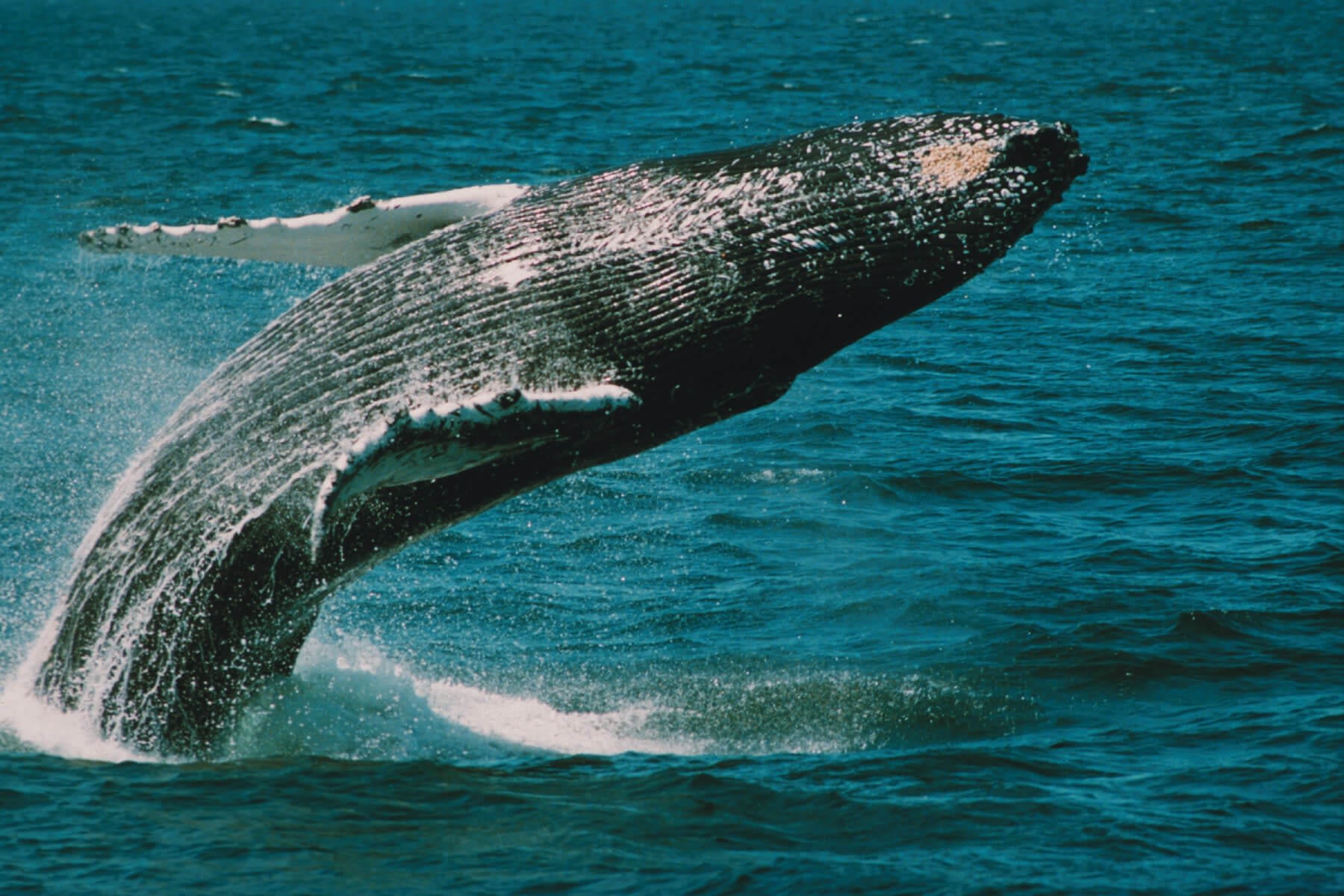 Around the world, there are 90 species of whales, scientifically known as cetaceans. From the largest whale to the unicorn of the sea.

Around the world, there are 90 species of whales, scientifically known as cetaceans. From the largest whale to the unicorn of the sea, each has distinctive features.

These types of whales, scientifically known as Mysticeti, are sometimes called “mustached whales” because of the baleen plates in the gums that run alongside a whale’s lower jaw. The baleen is similar to bristles on a comb and is made of keratin. The plates help capture the whales’ primary food source: plankton. Some baleens also eat small fishes and crustaceans.

There are 14 recognized species of baleen whales, but the ones below are some of the most commonly seen.

Blue whales are the largest animals on earth and feed on close to 8,000 pounds of krill every day. Blue whales can live between 60 and 120 years. There are five sub-species of blue whales and they can be found in the North Atlantic Ocean, North Pacific Ocean, Indian Ocean, and South Pacific Ocean.

Bowhead whales have the longest baleen plates of any whale. Their baleen plates reach 16 feet in length. Bowheads remain vulnerable, endangered or critically endangered after they were a primary target of commercial whaling. The Arctic Ocean and sub-Arctic regions are their natural habitat. Bowheads have a distinctive double-hump at the surface.

Fin whales are the second-largest animal in the world and can dive to depths of more than 750 feet. They can also make low-frequency noises that can be as loud as 188 decibels. Fin whales have a long slender body and part of their body has a pattern of light and dark markings.

Gray whales are the largest coastal whales and can sometimes be found as close as 15 feet away from the shoreline. The whales are known for having the longest migration as they travel more than 10,000 miles around the world during a year. Mating season is often linked to migration times.

Humpback whales (Megaptera novaeangliae) are well-known for breaching, slapping their flippers, and lob tailing (slapping their tail on the surface). The three subsets of humpback whales can be found in the North Atlantic Ocean, North Pacific Ocean, and the Indian Ocean. Humpbacks are distinguished by their large, knobbly heads and flippers that can reach 16 feet in length.

There are two different species of Minke whales, the North Atlantic and North Pacific. Minke whales are smaller and have a sharply pointed snout and a long ridge along their head. They also have two blowholes. The whales are typically black, dark brown, or grey and have a dorsal fin positioned past the mid-back.

North Atlantic Right Whales were close to extinction in the early 1900s after being hunted for whale oil. Currently, they are the most endangered with less than 500 of them worldwide. The whales are well-known for their large heads, which can be more than 25% of its body length.

There are 65 different species of toothed whales (Odontoceti). These types of whales are classified as such because they have teeth, one blowhole, and are smaller than baleen whales. Toothed whales are also hunters and can find their prey using echolocation.

Beluga whales have bright white skin that makes them easy to spot, but also helps them blend in with floating ice in the Arctic. The whales are also sometimes known as white whales. Belugas have a sophisticated sonar system that is used to maneuver through shallow water. They are often found in the northern hemisphere close to the Arctic.

Narwhals are also found in colder waters. Their most prominent characteristic is the long tusk on their bulbous heads, their arched mouth line, and a dorsal ridge rather than a fin. Adult males are known to have ‘jousting’ competition using their tusks.

There are two subsets of pilot whales, short-finned and long-finned. Short-finned pilot whales prefer warmer waters while long-finned whales prefer colder temperatures. Long-finned whales are most commonly found in the North Atlantic. These whales are leisurely swimmers. They are well-known for logging. Fishermen often see them float motionless on the surface and they appear like logs in the ocean.

Sperm whales have a single blowhole on their left side, which makes them distinctive from a distance. Their heads are square-shaped and they have wrinkly dark grey or brownish grey skin with white marking on the lower jaw and underside. The sperm whale’s head makes up for about one-third of its entire body length.

Some of these types of whales can be seen during a trip on the Cape May Whale Watcher boats, while others will require trips around the world. Whales are some of the most fascinating animals and seeing them up close is truly a once-in-a-lifetime experience.