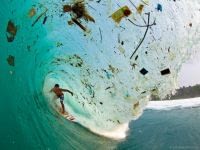 The ocean, one of the vastest and unique environments here on planet Earth. Our oceans cover about 70% of the entire planet

Marine Debris, what is it?

The ocean, one of the vastest and unique environments here on planet Earth. Our oceans cover about 70% of the entire planet, which has allowed humankind to greatly overestimate its ability to store and absorb our trash. When human manufactured material enters into our oceans it is then renamed marine debris. It is defined by NOAA as “any man-made an object that has been discarded, disposed of, or abandoned that enters the coastal or marine environment” (NOAA 2017). Marine debris is one of the most widespread pollution problems facing our world today. It is a worldwide issue and is found in every ocean, on every coastline, and it is making life in the ocean very difficult for many different species.

How does it get there?

Marine debris can enter our oceans one of two ways, directly or indirectly. When it enters the ocean directly it is by ship or fishing boats, essentially it is when the trash enters directly into the oceans without going through other water sources, such as streams or rivers. Indirectly is considered to be more common because these are land-based sources, and the trash enters our oceans through rivers, streams, and storm drains. These land-based sources are the most common forms of marine debris and account for about 80% of all the marine debris in our oceans today.

Image 2: the various types and quantities of marine debris found by the University of Florida during their beach cleanups last year from January-June (bay.ifas.ufl.edu).

Where does it go?

The movement of ocean water is greatly dependent on ocean currents, gyres, and wind. Once marine debris enters our oceans it can travel hundreds if not thousands of miles from its original entry point by entering these currents, making it extremely difficult to know exactly where a specific piece of marine debris originated from. Along with moving marine debris, these ocean currents and gyres can also create areas of debris accumulation, known as accumulation zones or often referred to as garbage patches (NOAA 2017). The most well-known garbage patch is the Great Pacific Garbage Patch out in the Pacific Ocean. No one knows how large this garbage patch is because its size and content are constantly changing due to our ocean currents, but it is one of the largest patches of marine debris in our oceans today.

Marine debris is a huge hazard that animals in the ocean have to face almost every day. There are three main ways that marine debris is dangerous to wildlife: entanglement, ingestion, and disruption of natural habitats. One of the most recognized impacts of marine debris on wildlife is entanglement. This is when marine debris like fishing gear, six-pack rings, balloon strings, and more become entangled around an animal, which can lead to injury, starvation, suffocation, and even death. Marine debris entanglements have been documented for more than 275 species of animals, including 46% of all species of marine mammals (California Coast Commission, 2017). Along with entanglement, many marine animals have been known to ingest marine debris. The debris is usually mistaken for food, an example being sea turtles eat jellyfish but might mistake a plastic bag for one because of their similar appearance. When animals consume marine debris it can make them feel full without gaining any nutrients, which may eventually lead to starvation. Along with starvation, consuming marine debris can lead to internal injury and internal blockages, which can lead to death. Lastly, marine debris can provide a method of transport for organisms throughout our oceans. Organisms attach themselves to the marine debris and get transported to a new habitat. A 2002 study of 30 remote islands throughout the world showed that marine debris more than doubled the "rafting" opportunities for species (Barnes 2002). All of these invasive species can hurt the natural populations of animals in the habitat they are transported to.

Along with wildlife, marine debris has a negative effect on humans in many ways as well. We all enjoy spending the day at the beach, but dangerous debris such as glass and needles can harm humans physically. When we increase the amount of debris in our waterways we also increase the number of harmful chemicals and pathogens in our water, greatly diminishing water quality in many areas. Also, a lot of the seafood we consume can contain debris. A study of predatory fishes in the North Pacific Subtropical Gyre found that 19% of the individuals contained marine debris, most of it plastic, this included species commonly eaten by people (Choy 2013). When consumed, plastic debris can concentrate and transport chemicals into and through the marine food chain, which in turn gets transported to us when we consume seafood containing these pollutants.

Image 5: Bioaccumulation: the concentration and transport of dangerous chemicals in the marine food chain. (Olenick 2013).

There are many ways an individual can help with the issue of marine debris, starting with keeping our beaches clean. When you go to the beach be sure to clean up and dispose of all the trash you bring with you and that you find. Remember, leave only footprints! Also, pick up and dispose of trash you find in your neighborhood, school, or local park, in doing this you will greatly reduce the amount of trash that ends up in our waterways and in our oceans. Make sure you follow the 4R’s, Reduce, Reuse, Recycle, and Refuse. Instead of using single-use plastic, switch to reusable products such as reusable water bottles and cloth shopping bags. Be a smart shopper, purchase items made with recycled materials or have little to no packaging. Choose natural materials over more synthetic materials. Lastly, get involved, organize a beach cleanup, volunteer at a cleanup day, donate to organizations that are cleaning up our oceans and educating people on this issue.

How you can help

NOAA. 2017. What is marine debris? Retrieved from https://oceanservice.noaa.gov/facts/marinedebris.html

NOAA. 2017. How Marine Debris is Impacting Marine Animals and What You Can do About it. NOAA Office of Response and Restoration Blog. Retrieved from: https://blog.response.restoration.noaa.gov/how-marine-debris-impacting-marine-animals-and-what-you-can-do-about-it